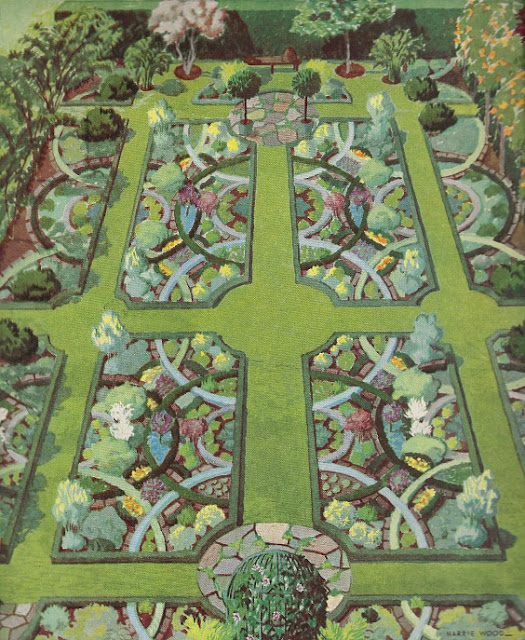 When I turned the page to this picture in my January 1938 Woman's Home Companion magazine I was entranced but thought it was just a painting by a Mr. Harrie Wood and surely not a real garden.

I was wrong. This is just half of the knotted herb garden that belonged to a Mrs. R. M. Littlejohn in Southhampton, Long Island, and it was designed by John Dukinfield.

One Google search led to another and I discovered it was at what is now 107 Great Plains Road in Southhampton, now named Westlawn. The house was designed in the early 1890s by F. Burrall Hoffman for Charles and Lacie Lee.

For an herb lover such as myself, the article written by Grace Tabor was fascinating.

The 'knots' are formed by sheared hedges to which certain herbs lend themselves more readily than others and because they were first cut to strew on the floors as disinfecting and deoderizing mediums long ago, they are to this day called 'strewing herbs' as distinguished from culinary herbs and nosegays. These strewing herbs form the knots as you see them here--lavendar, germander, Roman wormwood, winter savory, hyssop and santolina.


I wasn't familiar with "strewing herbs," are you?

Tabor also says that the dittany of Crete or 'righte dittany,' origanum dictamnus was unknown then [in 1938] in America and growing rare even in native Crete, "probably because the goats love so to graze it."

Supposedly Venus gathered dittany to heal the wounds of Aeneas. And Tabor cautioned herb gardeners not to confuse it with the species dictamnus, the gas plant of old gardens which is sometimes called dittany.

[Please see Poppy's comment below where she writes about the dittany of Crete that she knows as 'erontas' on the island of Crete where she lives. Thanks, Poppy!]

Another thing that fascinated me was that this knot garden above was only half of the actual garden, the other half mirroring what you see above. Can you imagine the gardening staff that would be required for such a garden today?

Here is a plan detailing the plants used. 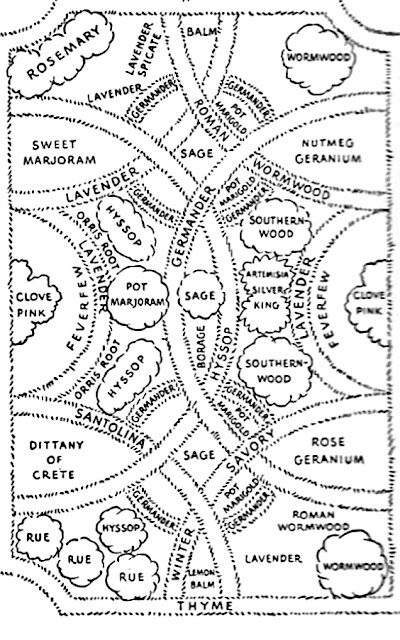 Can you picture walking through this herb garden at its height of glory? And "outside the knots are rosa gallica and rosa damascena." How I would love to have seen that!

A few other details: The groundcover was viola rosina. There was a smoke tree and pink dogwood. On one side there were mountain ash trees and an arbor covered with passion vine.

One final touch as I leave you to dream along with me of strolling through this knotted herb garden.

We would enter through a pleached alley of theifera flowering crab that divides the garden. And I would think I had died and gone to Heaven.

A perfect day for... 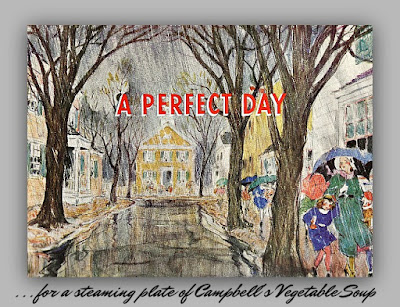 Have you had much rain in February? We may very well reach last February's record breaking rains here in Nashville.

And a cold rainy day is perfect for soup. Did you notice that the 1938 ad for Campbell's Vegetable Soup above says "a steaming plate"? I've noticed in many of my vintage magazines that a soup bowl is called a plate.

I make a big pot of vegetable soup regularly, every time I want to use up everything in the produce drawer of the fridge before a trip to the grocery store. 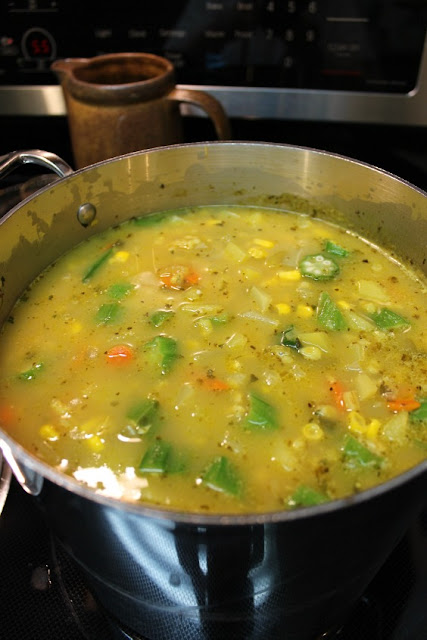 We have to have a pot of chili once... 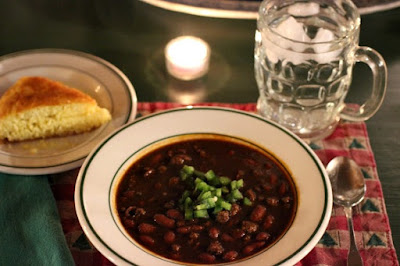 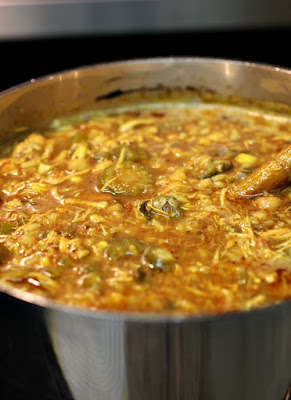 But vegetable soup appears at least once a week around here and is my personal favorite. We also have some type of legume soup every week, and chicken one night, and fish several nights a week.

But there comes a day when RH asks "Where's the beef?"

That's when only the old beer-braised roast beef from an old Bon Appétit recipe will do and I cook a bottom round roast.


After searing the roast I take it out of the pot and sauté a chopped onion and shallot in the drippings. Then I add a large can of fire-roasted diced or crushed tomatoes and cook 5 minutes.

Then add one bottle of Guiness Stout, oregano, bay leaf and 1 tablespoon of Worcestershire sauce and freshly ground black pepper. Put the roast back in the pot and stir in beef stock to cover.

Bring just to a boil, cover, and reduce to simmer for about two hours. Add one cup chopped parsley and cook 30 minutes more, or until fork tender. 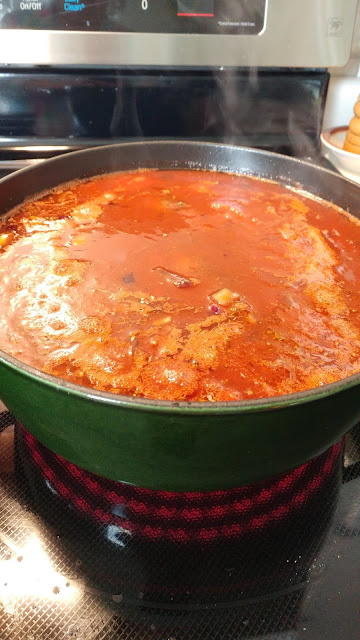 I made this last week and the first meal of it was delicious, as were the sandwiches I made of it for three people for lunch, but the best meal of all was the vegetable-beef soup I made from the sauce the roast was cooked in. I make two other recipes for roast beef but the soup made from the leftovers of this recipe is the best. RH even eats it leftover for breakfast. 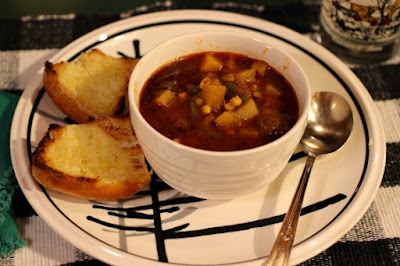 A favorite easy bread we like to go with both the first meal and then oven-toasted for the soup are rolls made from frozen Bridgeford rolls. Have you ever tried them? I think they're the best frozen rolls you can buy. They need to rise at least 5 hours so I put them in a pan early in the day.

Last week I tried a trick I read in the February 1944 Woman's Home Companion. After putting the rolls in the pan to rise and brushing them with melted butter, I sprinkled celery seed and celery salt on them. They were delicious and reminded me so much of the salty yeast rolls I ate at Wednesday night supper at church when I was growing up, a little different from my mother's good homemade rolls recipe. 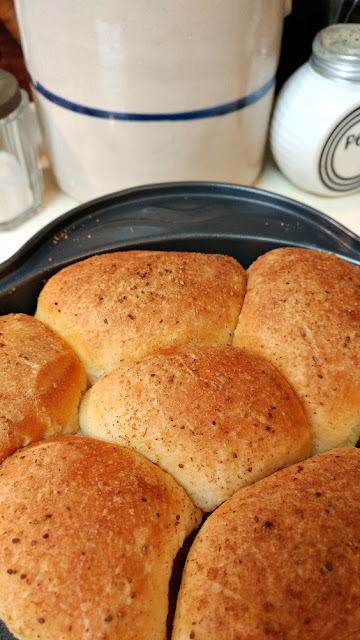 I like to use Mikassa's Black Forest plates in winter after I put Christmas china away. I only have three plates of it, all from Goodwill, but it seems perfect for January and early February with my old USA soup bowls. 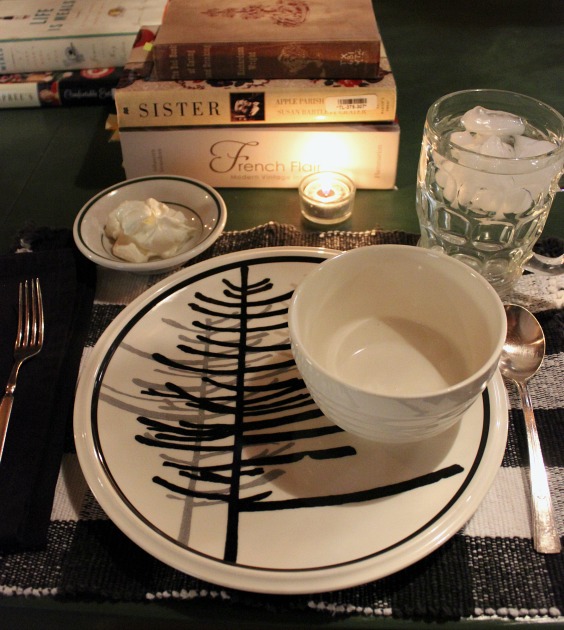 It's fun to use these old Arby's glasses with them too, with their Currier & Ives prints. 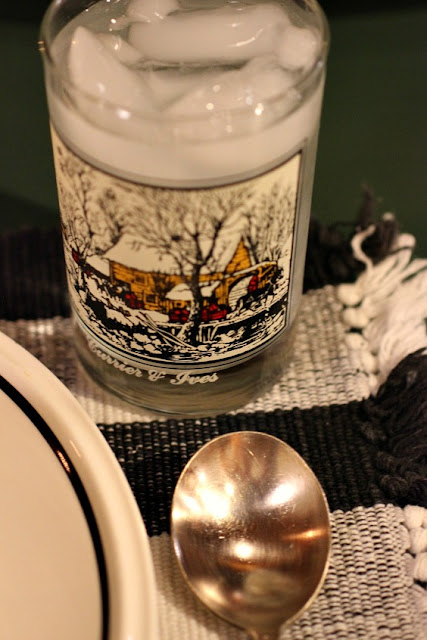 And I just have to show you my new green Staub Dutch oven with a pine tree etched in the lid. Isn't it cute? And it's just right for a small pot of soup or a small pot roast without having to get out my huge fennel green Le Cruset. 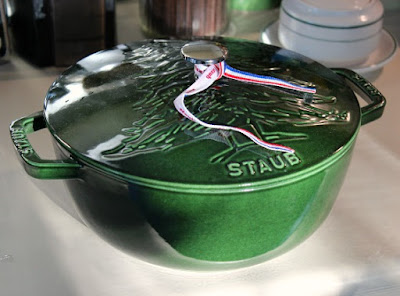 Has soup been on your table lately during a cold rainy or snowy winter day?

What is your most special soup? Will you tell us about it? 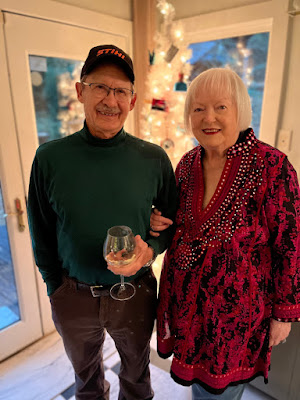