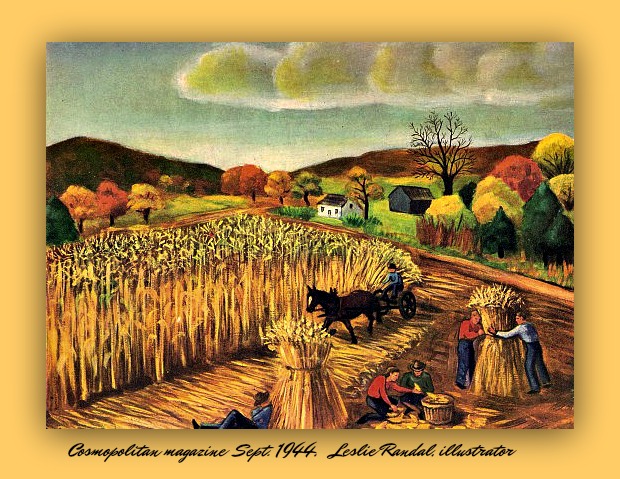 "Corn Harvest" by Leslie Randall was reproduced full page in the September 1944 issue of Cosmopolitan magazine.

I love this painting so much that I was tempted to cut it out of the magazine and frame it except that I am wholeheartedly opposed to harvesting pages from the really old magazines in my collection.  When I see pages for sale on eBay from them I want to steal the seller's scissors and remind them that once these old magazines are gone they're gone forever.

This painting was on display in the Metropolitan Museum of Art in 1942. It speaks to my heart, probably because my father was raised in a farming family and my sisters and I were raised hearing the stories of farming.

To me, there is something almost sacred about a family farm and it hurts to see so many disappearing in our country. I guess it's why I follow so many of the homesteading bloggers and hope that one good thing to come out of this pandemic time is that more people are turning to growing their own food.

I remember one hot summer afternoon twenty years ago when my father and I sat on the front porch and talked about the book I was writing about two families of farmers. I took page after page of notes as he reminisced, giving me authentic details I had questions about.

Then we started talking about so many farms being foreclosed on that year.  Daddy got almost emotional, telling me that it could only hurt our country when small farmers were losing their farms to the big industrial conglomerates. It really bothered him. And our conversation stuck with me.

I know he would be proud of the young adults today who are trying to raise as much of the food for their family as they can. His father would be, too.

The hay appeareth, and the tender grass showeth itself, and herbs of the mountains are gathered. [Proverbs 27:25] The Book was made for those who live on the land.

David Grayson in The Countryman's Year, 1936

[I don't know why there's such a gap between the picture and the following paragraphs. It's not that way on my draft.]