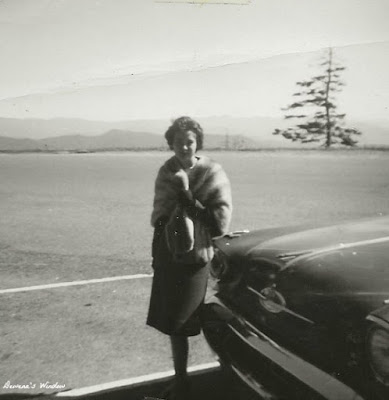 On November 3, 2016, I wrote a post here called "The Shorter the Sleeves, the Longer the Gloves," and had a photo of myself wearing my mother's silver mink stole on my honeymoon many decades ago.

When I found the photograph above, another one RH took of me on our honeymoon, it reminded me that I had intended to do a followup discussion of furs. With the move back to Tennessee not long after that it never got written.

What better time for it than now during the bitterly cold weather across much of the U.S. and Canada?

In comments at the old post, here, many friends wrote of still wearing fur coats or jackets in cold weather, especially ones from consignment stores even if they might not buy new ones now.

One woman even wrote that she had once lived in the Yukon and wore fur, where I would guess it makes not just perfect sense to wear them but good plain horse sense also. I imagine there may have been many women in the Chicago area who wore theirs this week, if they ventured outside.

Deborah of The Beautiful Matters wrote that she had some fur collars she loves found at consignment stores and I thought of her when I spotted this one at a local antique mall after Christmas that was 50% off and cost me a big $10. 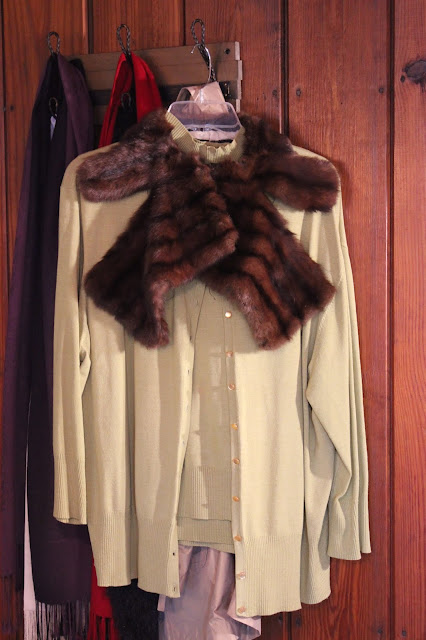 I could not resist that bargain and it feels so soft and warm around my neck and reminds me of the mouton fur collars my girlfriends and I wore in high school with sweater sets and form-fitting wool skirts with kick-pleats. We really dressed up for school back then. 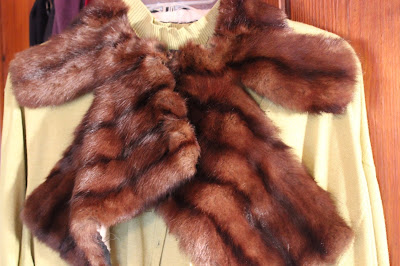 I don't know if I'll ever get up my nerve to wear it anywhere but if I do I think I'll buy a piece of soft lining satin to line it with. There's even a little hook and eye at the neckline that is broken so I need to replace that.

Before you ask where is a picture of me wearing it or my mother's mink stole now, here it is... 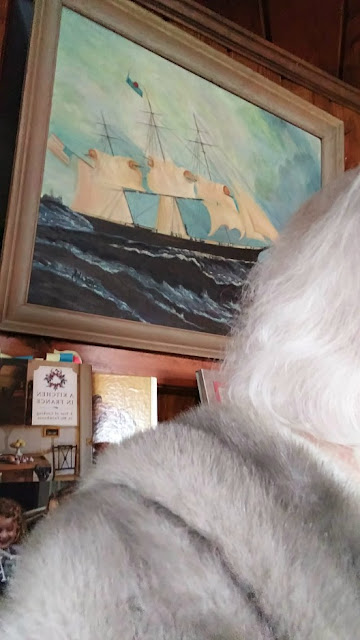 And that's all you're going to see of me in it for now because a jillion attempted selfies did nothing but show how frizzy my freshly shampooed hair was and that I badly needed to visit a professional makeup artist first.

I splurged on a good haircut in downtown Nashville a couple of weeks ago so I will show you pictures the stylist took of me afterwards, even though lipstick was all I'd taken time for that day. 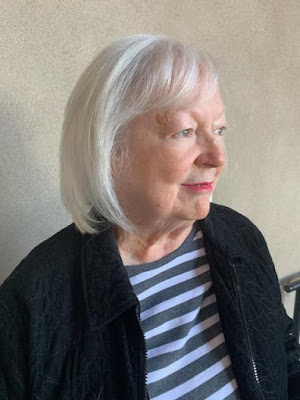 Why can't I blow dry my hair that smoothly? I've decided that RH needs to go to hair salon school so he can do it every morning for me. And learn to be a makeup artist. Don't you think he should do that?

Then I could wear my mother's 60-year-old mink stole almost as elegantly as Princess Marina of Greece did in the picture below in 1934 in Vogue magazine when she was about to be married to H. R. H. Prince George of England. 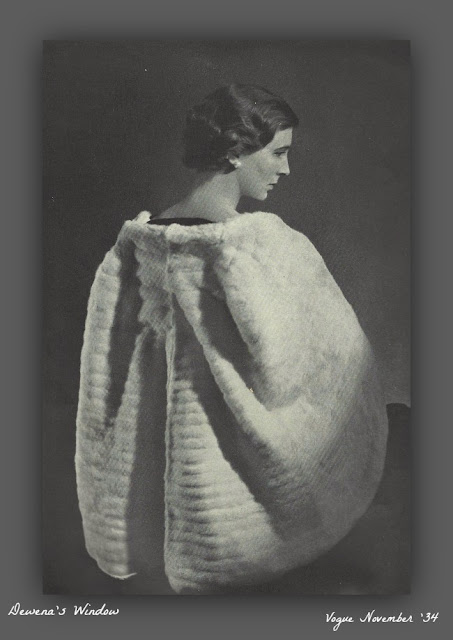 Her fur is an ermine cape from Molyneux, who also designed her wedding gown. Isn't it gorgeous? 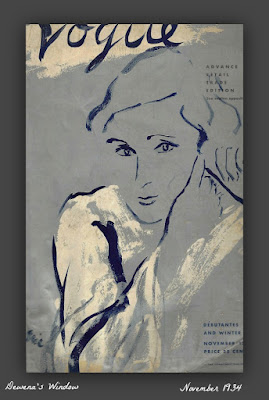 I treasure the old Vogue magazines in my collection and can spend hours reading every single word in them, even the advertisements, and swooning over the beautiful clothes and furs.

After reading the article about the princess, I talked to Greek-Canadian girlfriend Poppy about her and she told me lots of interesting things about this princess of Greece and Denmark who after her marriage was a beloved member of the British Royal Family until she died in 1963. (Poppy, I could not find the notes I took that day and if you happen to read this, please add in what you remember!)

I wish so much that I had a photo of my mother wearing her mink stole but my sisters and I couldn't find a single one of her in it for this post. We still remember how exciting it was when our father surprised Mama with it and how perfectly elegant she looked in it, the silver fur lovely with her hair that was dark as a raven's breast.

Another surprise came to Mama much later in life when her sister invited her on a Mediterranean cruise. On it she had the joy of visiting Greece herself. I have a copy of her itinerary and read it again today.

She arrived in Athens in October of 1997 aboard the Orient Lines' the Ocean Majesty, which I understand is now operated by a German cruise line. 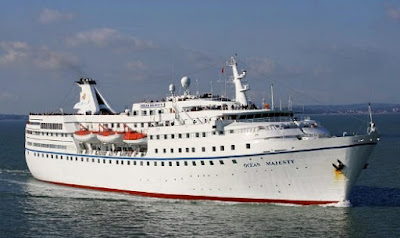 She and her sister Marty toured Athens for two days and then went back to the ship for ports of call at Delos and Mykonos and then on to Santorini. They also traveled to Rhodes and to Kusadasi and then on to Istanbul.

Here is a photo of her at Santorini... 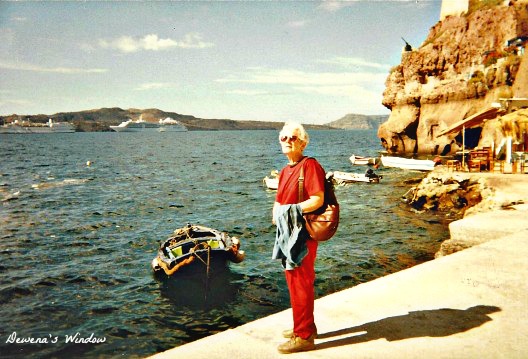 I'm so grateful that my dear mother, the first Dewena, who I was named for, was given the opportunity for this trip of a lifetime by her sister. What a great time they had with lots of stories to tell us!

My mother had four sisters and they were all very close, seeing each other as often as they could. That's when the fun really happened. Oh, those sister parties at Myrtle Beach! Only Mama, the oldest of the five girls, and June, the baby sister, are are here with us now, the three middle girls now in their heavenly home.

Here is Mama sitting next to her mother, with three of her four sisters, celebrating my grandmother's birthday. 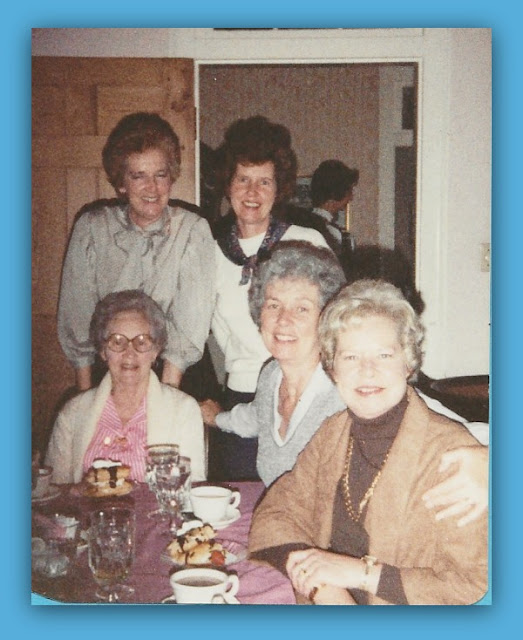 I've thought a lot about these beautiful women while writing this post. I grew up in the elegant age of the 1940s, 1950s and early 60s and remember how beautiful my mother and aunts were, dressed up in their finest.

Whatever our view of wearing fur is now, we all must admit that the early part of the 20th century was certainly a glamorous age, wasn't it?


I never could see why women could be seduced with jewels, but, oh, I'm sorry for those who are tempted too far by furs! I should like to be swathed in them.

I don't care what they say: I love fur; I read National Enquirer; I rarely recycle; I think Prince Charles and Camilla deserve to be happy.

Julia Reed in an interview on
wowowow.com

RH and I love your comments! They are sent to my email for moderation first but I do hit publish as soon as I read them. A few commenters' comments are not sent to my email for some reason but I try to visit that section on my design page twice a day to see if they're hiding there so I can publish them. I went the first 3 years of blogging not knowing that was there and when I discovered it there were many pages of old comments that never got published. I was so embarrassed and contacted recent ones but hid in shame from those who had given up long ago.

In these busy days I appreciate so much when you take time to comment. Thank you so much!