A Candle-Snuffer and A Kitchen Tour

My hunt for a vintage candle-snuffer began in late January. I had left a Christmas platter (The Old Curiosity Shop) by the kitchen sink, flanked by two candlesticks, for winter cheer. I was on my third pair of Classic Green tapers I order by the box, burning them at dusk while preparing supper. (I also buy Wedgewood Blue for my dining table.) 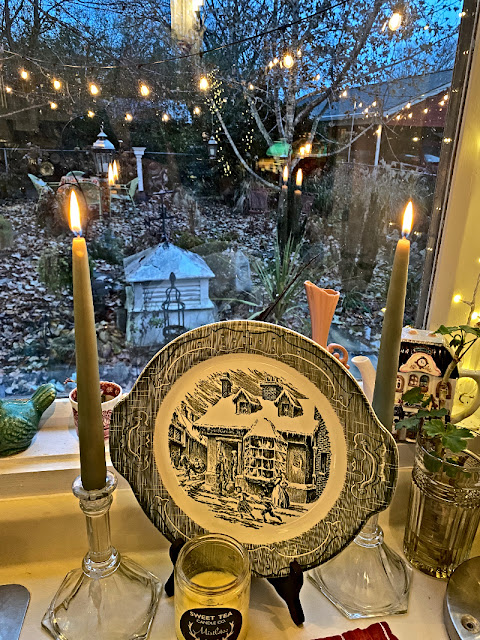 One night RH blew them out for me, not pulling them forward and cupping a hand behind it as I do. He puffed them out with all his lung power and wax flew onto the window glass, something I discovered the next day.

That began my online search for a vintage candle-snuffer but none struck my fancy. One night I was flipping through one of the old magazines from my vintage magazine collection, a House & Garden, January 1967 (our young married days).

"Notes for the Hostess" is my favorite monthly column in the old magazine, where I read about tempting objects for the hostess to purchase. One object was a "polychromed wrought iron candle snuffer with a butterfly on top." I wanted one. 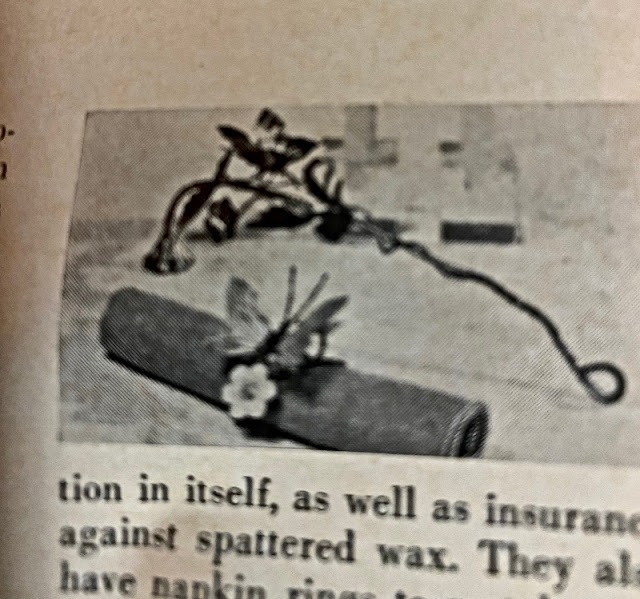 It would be useless to search for one on eBay, right? I put in exactly those words and found:

It was darling and only $20, not an exact replica of the 1967 one but near enough. When it arrived I knew it would have a permanent place by my sink, with a change of plates seasonally. 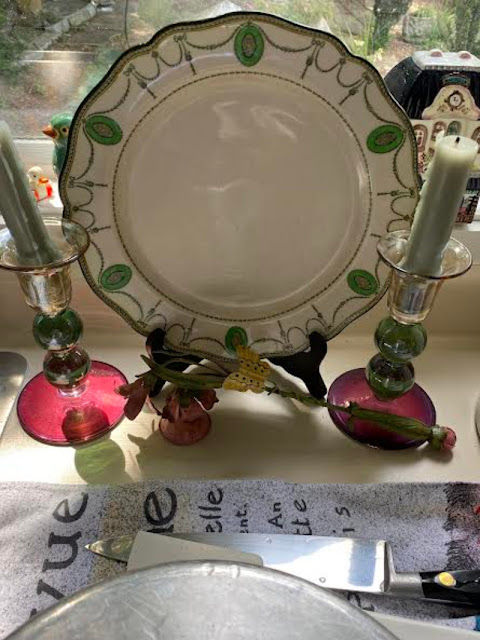 My spring plate was Royal Doulton's Countess pattern and I changed the candlesticks to a 1980s Polish pair I've had for years.

I have three plates and a large platter of the Countess plate, bought in the 1990s in Blowing Rock, NC as a gift for my mother when her eyes lit up finding the platter in an antique shop on Main Street. And one day came when she said her "cooking the turkey days" were behind her as my sisters in Florida began hosting Thanksgiving.

I kept this plate up until June when I spotted this one at our local antique mall. 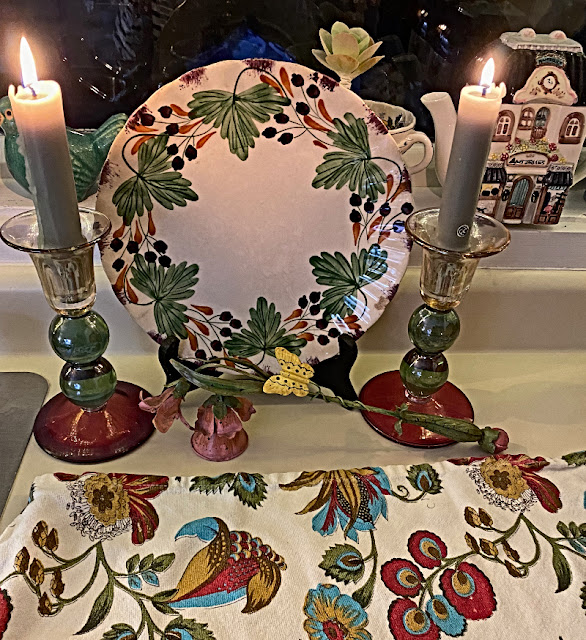 We have jillions of blackberries in our front hedge row every summer and this plate, 'Blue Ridge' from Southern Potteries, whispered Take me home.

It says Summer to me.

With supper being in daylight in the summer, the candles don't get lit until after-dinner cleanup when RH and I pause whatever show we're watching. He puts leftovers away while I load the dishwasher and one night I began taking pictures of our kitchen at night when it might not show that I hadn't swept the floor. 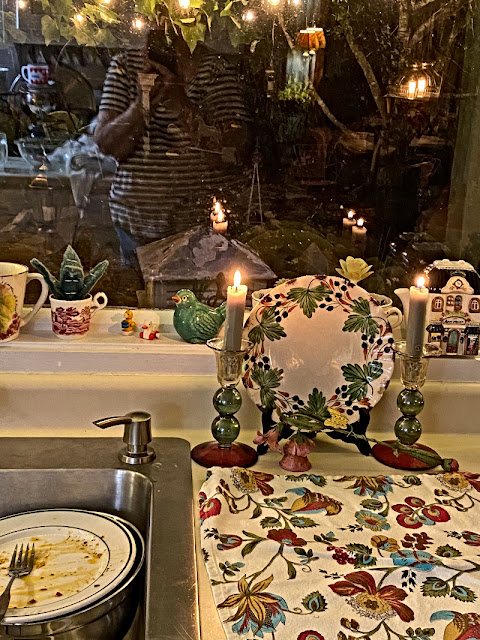 After many variations of styling my open kitchen shelves, I put practicality before pretty and cleared the lower shelf to hold all the jars of things I use regularly.

But be sure to notice the vintage tall candle of a bunch of asparagus on the top left end, a gift from RH's brother to me. I swooned over it and two large vintage candles of orange coral now over my china cabinet. 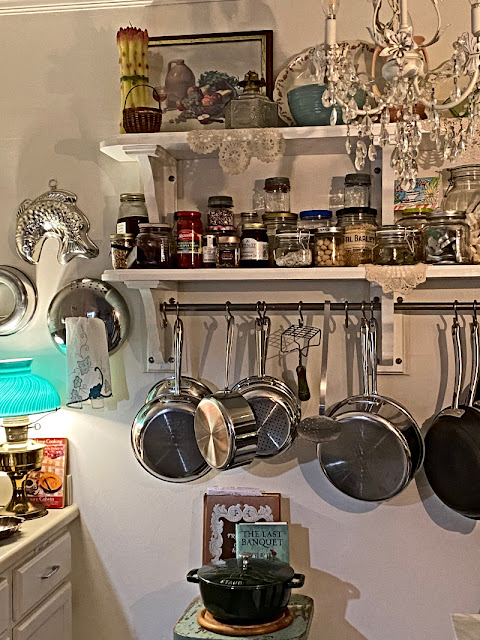 Even though I think copper in a kitchen is the ultimate, most of my copper molds went to a daughter-in-law except for the few I actually use (aspic lover that I am) and keep in a cabinet.

Instead I've put up two pretty silver molds and a lid with drainage holes I bought at Goodwill. The lid doesn't fit any of my pots but does look pretty hung on the wall. And the 1960s Aladdin lamp is one of seven, most given to us back then for Christmases by friends where the husband was an executive at Aladdin. And there are others in our children's homes. 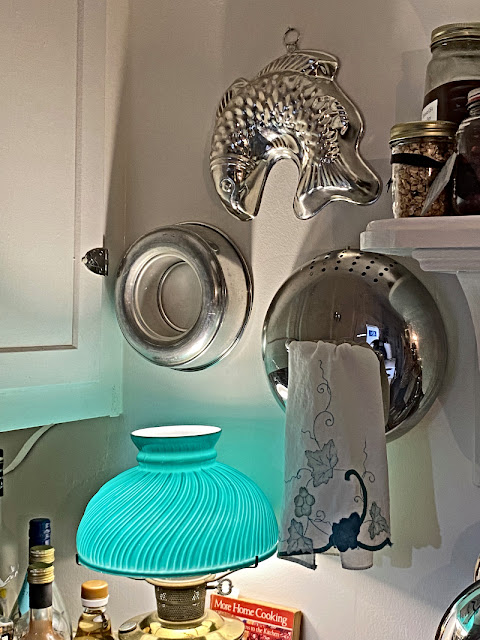 The right end of the shelves, built by RH and his brother when we moved here to Home Hill, now hold rices and jars of Rancho Gordo beans, my favorite.

There are three pieces of furniture that fit in my kitchen, giving me at least a partly "unfitted kitchen" that I always wanted. We found the dry sink at our local antique mall and it holds baskets of food behind doors and special dishes on top. 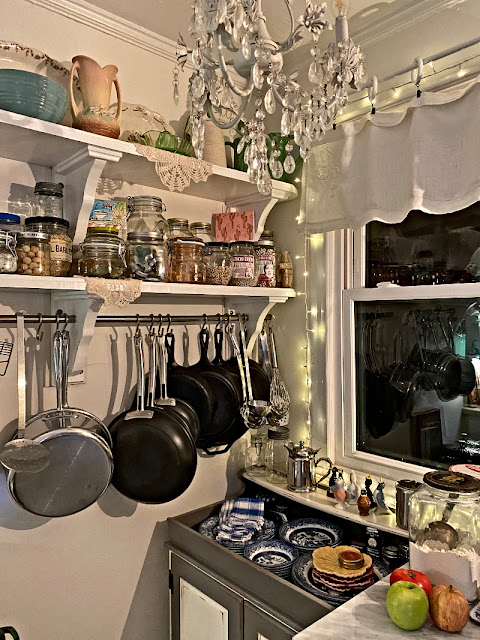 I keep the Blue Willow out for everyday use. 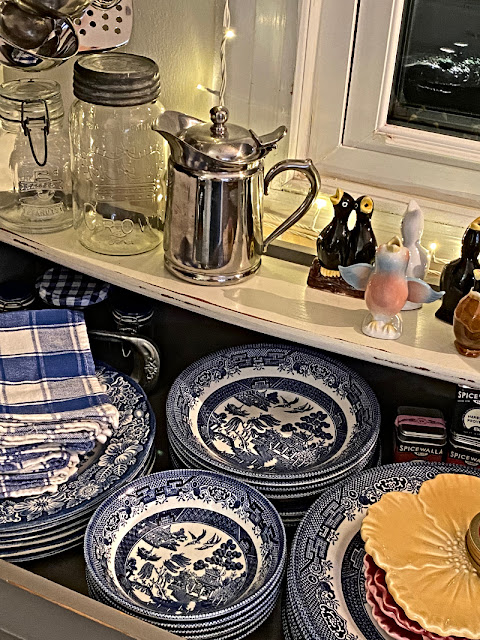 And I've been using these pretty Independence Hall ironstone plates since the Fourth of July, ironically Made in England. You guessed it, a gift from RH's brother. 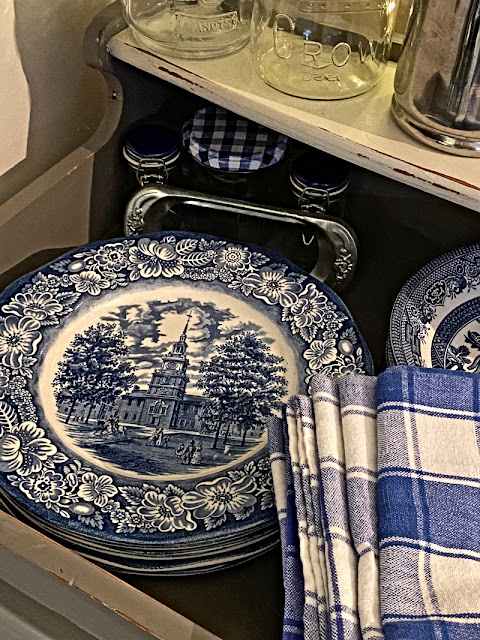 But the sweetest gift of all from my brother-in-law was this collection of pie birds! 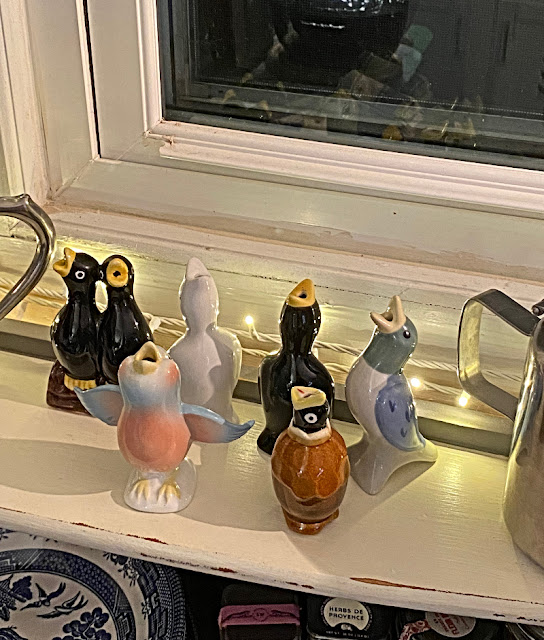 I adore them all but my favorite is the pheasant, front row right. I haven't used them yet, afraid that baking will discolor or crack them. Anyone have experience with using a pie bird? I would like to use them for my chicken pies as I know they were originally meant for the meat pies of England, not dessert pies.

Not that I make many chicken pies these days or even dessert pies but I do have a freestanding cabinet topped with a nice marble slab that is perfect for rolling out pie crusts. This piece has one shallow drawer and two deep ones and hold so many of my baking things. 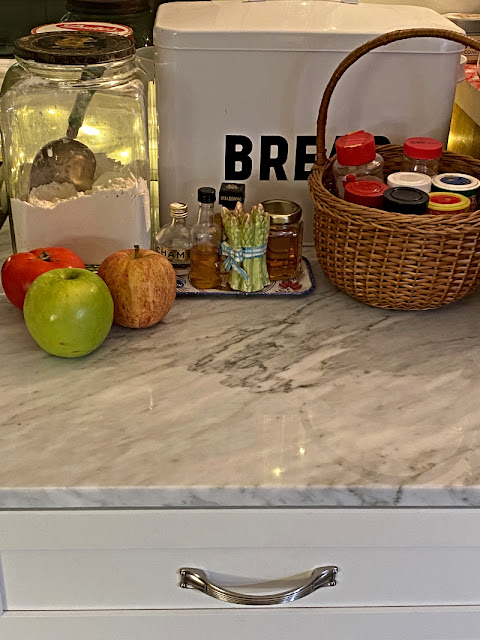 The third piece of furniture in our galley kitchen is a taller chest of drawers that RH used for his tools at our old house. Now his tools are limited to the bottom two drawers and I get the top three for spices, etc., which I think is fair since he now has a large workshop out back to keep them in.

On top is the microwave that men can't live without, a beautiful blue bowl holding tea towels, a large gorgeous blue fruitcake tin given to me by a daughter-in-law who used to keep her button collection in it, topped with a green cabbage bowl, and a lamp. And above it all is a print I fell in love with at the antique mall. It's appropriately named 'Vegetables' by Helen Paul and must be one of her older prints as I can't find it online. The colors of the vegetables make me so happy. 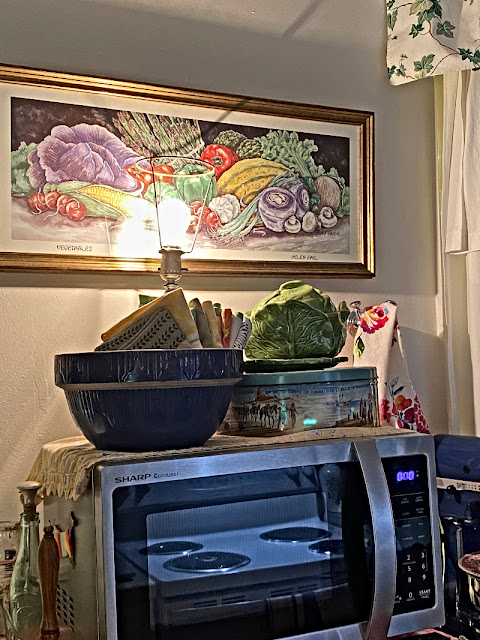 I have to show you my new (old) blue KitchenAid mixer, again, a gift from you know who. It's so pretty! And I finally solved the problem of a dusty mixing bowl vs. hating the sight of plastic wrap over it by putting a pretty vintage Spode plate on the bowl, Spode's Pink Camilla. 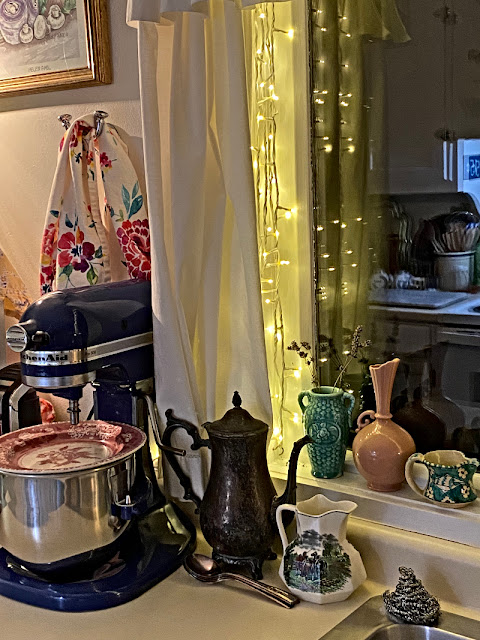 I've circled the room now except for showing the fridge and trash can. There are other sweet items in this room that were gifts from my sisters too. My house would be half empty without the generosity of others. 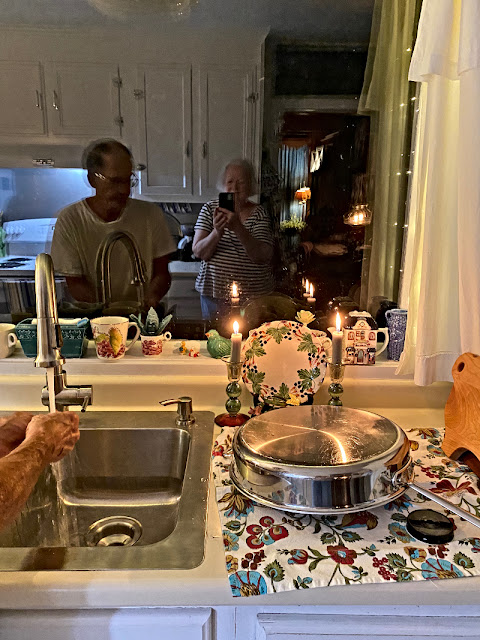 Time for him to have his bedtime bowl of ice cream. 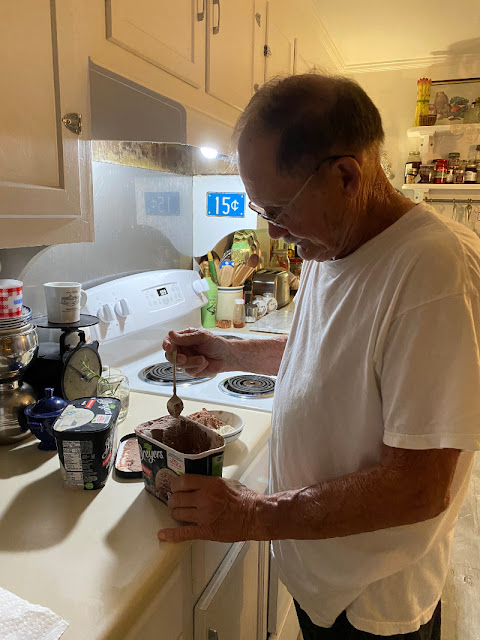 No more worries of RH blowing candle wax on the kitchen window.

Now he can snuffle the candlelight. 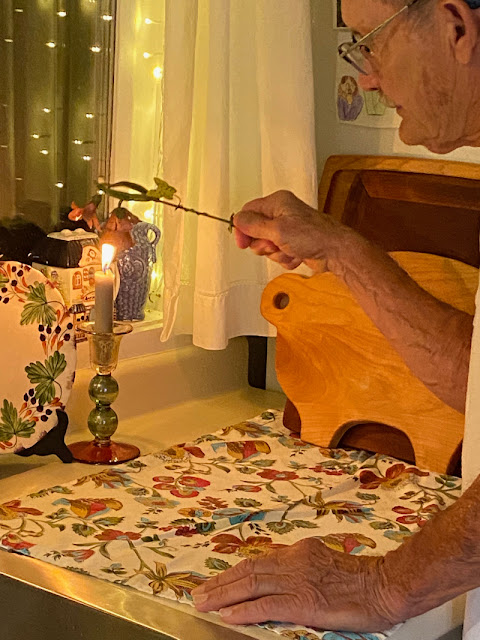