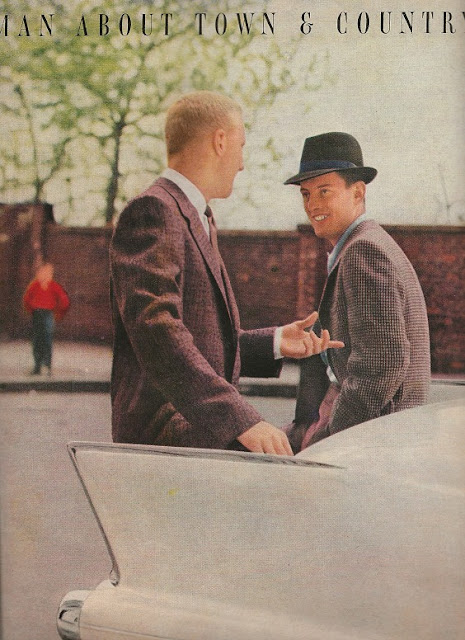 I can't even imagine this era.

If my son was going to Princeton in 1955, I would send him off in a Cadillac Eldorado? Perhaps a prop, perhaps not. And he and his fellow classmates would wear a tie with shirt and sports coat? And of course there were no women matriculating with them, not until fourteen years later.

This time I'm not going to give the name of the young man on the left with his face turned away from the camera because my research into him ended on a sad note. Just eight years later in 1963 he died. His mother helped an art museum's acquisition fund in memorial of her son. I couldn't help wondering if he lost his life in the Vietnam War.

But he certainly looks handsome in his Jackman & Sons all-wool bouclé sports coat, $90.

His friend on the right is George Sumter Schreyer, wearing a hound's-tooth-check sports coat of fine cashmere, $135, also by Jackman & Sons. His hat is a Jaguar by Knox, $15. I remember that Knox label inside my father's hats. You would think that a name like Mr. Schreyer's would have brought some results on the internet but there was nothing I could connect with him. 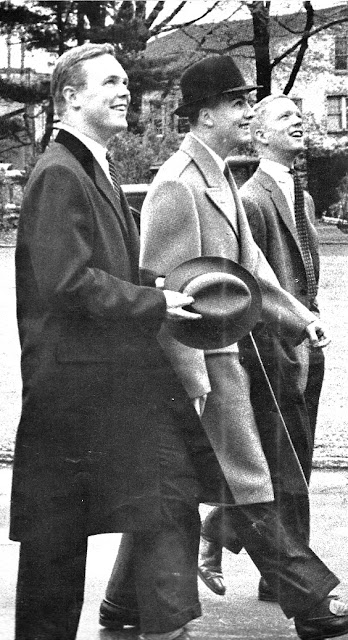 The young man on the left above is Thomas C. Murray wearing an oxford-gray cheviot Chesterfield with velvet collar, $89. There were far too many Thomas C. Murrays on the internet to discover what this Thomas did after college.

But I think I can safely guess that the Princeton student in the center, Daniel C. Rebhun, Jr., may be the man of the same name who wed a Miss Carruthers on December 30, 1956. He "wears a British warm in classic woolen, $125.

I didn't even attempt trying to research the remaining young man, not with a name like Charles E. Moore. He wears a Shetland tweed sports coat, $65. All of the above men's fashions were from Rogers Peet, New York. Rogers Peet was bought by Arrow in 1962. 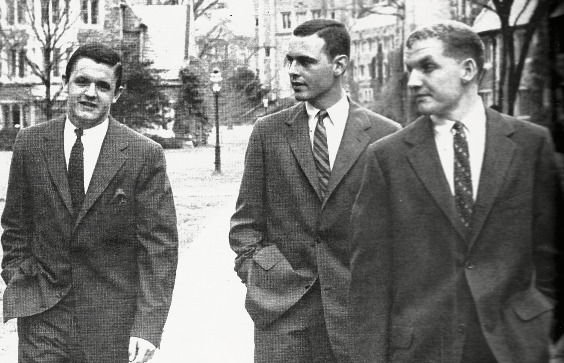 These three young men above are wearing Shetland jackets by Grieco, $75 and up. The first one is Thomas W. Pettus, Jr. in a deep gray flannel with Lovat stripe. I think he possibly was married to Miss Diana Brewster, of Barnard, in May of 1961 at St. Bartholomews but the marriage must not have lasted as she seems to have remarried later.

The man in the center is C. Carter Walker, Jr. wearing a gray herringbone worsted suit. I found his obituary online and he seemed to have lived a long and worthwhile life. Member of Class of 1956 of Princeton, serving three years in the Navy, an athlete all his life.

I loved this sentence in his obituary: "Carter and Julia took New York by storm." He and Julia were married 50 years until she died nearly a decade earlier than him, philanthropists all their marriage. And then this nice tribute: "Carter was a charitable, charming southern gentleman, who always put his family first."

What a nice man!

Maybe it was just as well I couldn't find anything definite on the Princeton student on the right in the picture. I mean, who could top what I found for Carter! But James C. Crimmins is wearing a brown-black herringbone cheviot. I'm not sure what a cheviot is other than the fabric is from Cheviot sheep?

All of these photographs are from the August 1955 issue of Town & Country, as were those from the previous post.

I have one more fashion post from this issue that I'll share next. I'll go back to the women of 1955...the women of Seattle, Washington. And I've just begun researching them, already finding fascinating information on the internet about the real life models of the article.

I don't know if these 1955 fashion posts are of real interest to anyone else but it has made for some happy moments for me.