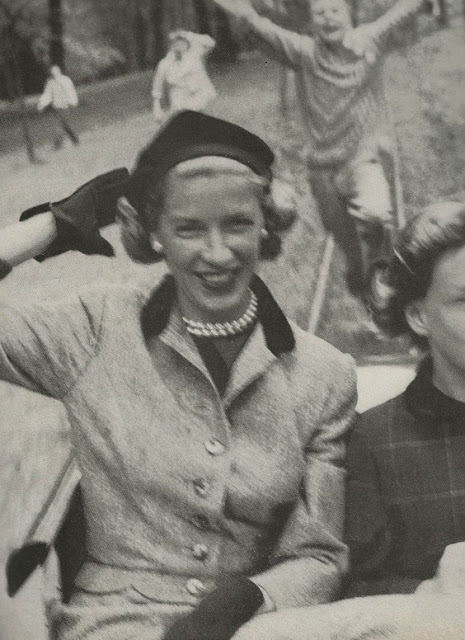 Mrs. Hoge Sullivan wears a Ben Reig suit of salt and pepper tweed while she rides the miniature railroad at the Woodland Park Zoo with her daughter Mary Lou.

This was about all that Town & Country wrote about this beautiful woman in their 1955 August issue but the internet yielded much more.

2) Her husband served in Africa and Italy during WW II. And he was the first manager of Seattle's Space Needle!

3) I found an earlier picture on eBay that was no longer for sale of Mrs. J. Hoge Sullivan and her daughter Mary Lou! 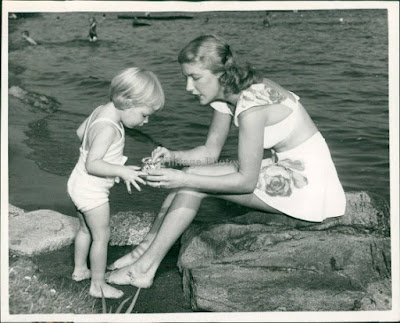 I love her swimsuit! 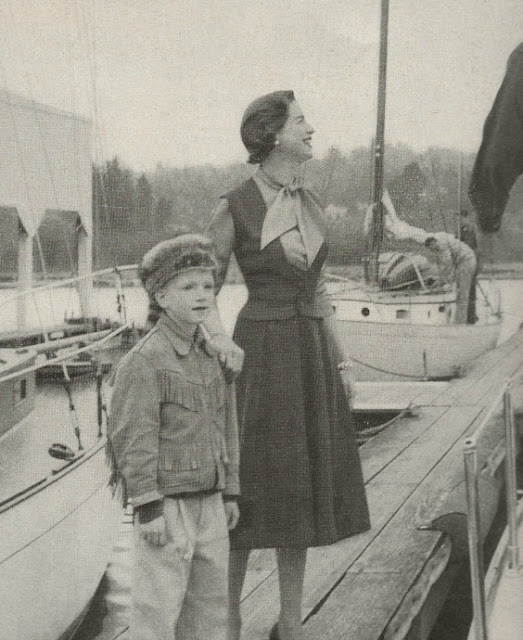 1) B. H. Wragg was famous at that time for its separates to be mixed and matched, the fabrics often designed by famous artists.

2) Upon the passing of our model above at the age of 77, The Seattle Times wrote about how she (then Annette Ingham Lobb) and Gordon Ingham met. Her father took her abroad "to discourage an undesirable suitor."

The plot twisted: Young Gordon Ingham, a fellow passenger, proposed on Dal Lake in the Vale of Kashmir. She accepted. They stayed married until his death in 1988.

Gordon and Annette raised four sons and were active in many charitable causes. But what really intrigued me was that she was a prolific although unpublished poet. I love what Annette said:

I would like to have been a really good writer, but I know I am not. But I like to write, and so I do...it's good therapy. 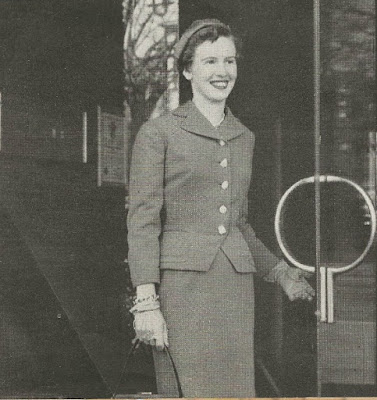 Mrs. Thomas A. Davies is the great-granddaughter of one of Seattle's founders and is program director of the Seattle Art Museum Guild.  She's wearing a dressmaker suit of Lesur wool (one of the best quality fabrics of the 1960s).

I couldn't find anything else out about Mrs. Davies but there is plenty about her great-grandfather, David Thomas Denny, a member of the Denny Party that traveled by covered wagon to Oregon, and then by ship to Seattle, landing September 25, 1851. 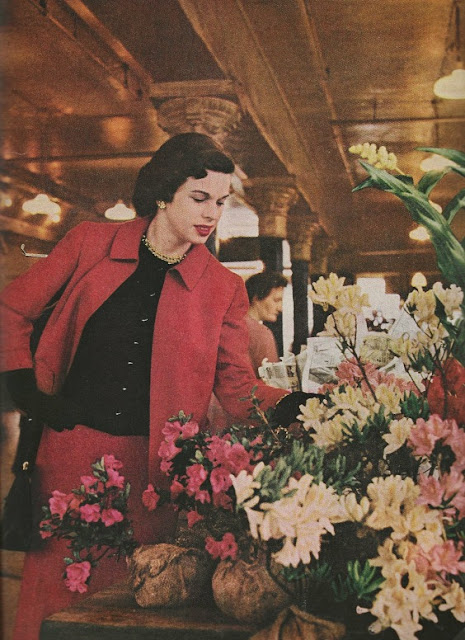 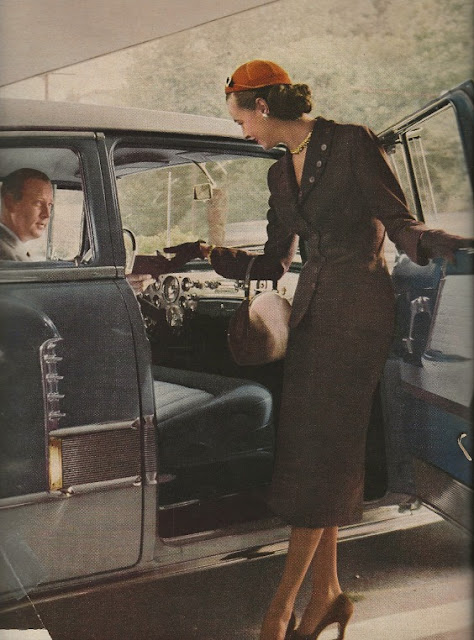 I love the photo above! First of all that automobile. Look at all the leg room! Next, that suit!

Mrs. Lawrence H. Arnold arrives at Canlis Charcoal Broiler with her husband in a Packard Patrician. She wears British worsted by Irene.

1) There was hardly a leading lady in Hollywood in the 1930s who was not dressed by Irene! And in the early 1960s Doris Day film Midnight Lace, that gorgeous black lace outfit was designed by Irene.

2) Canlis is Seattle's landmark fine dining destination, the most upscale dining experience there. It is still owned by the same family, in a midcentury-modern house. The "old-school posh" restaurant is temporarily closed of course but I got hungry just looking at pictures of the food plates on their website.

3) Mr. Arnold died in 1962 of cancer and a library was donated in his memory, and that of his mother, to the Hutch, world known institute for cancer research. 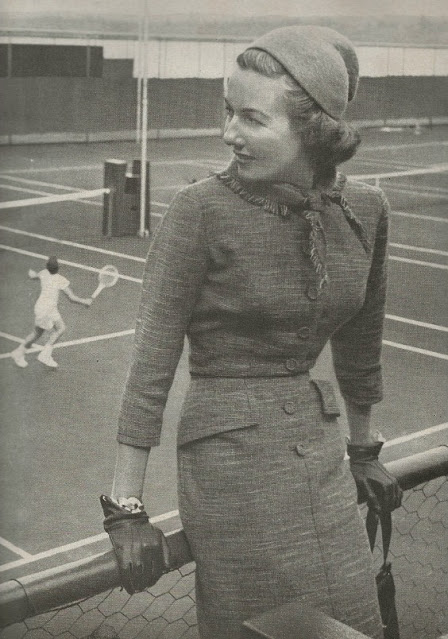 Mrs. Walter P. Shiel, Jr., the former Barbara Jean Harlow, is watching the Kalakala Ferry at Coleman Dock. She is wearing a coat of Anglo tweed by Frank Gallant who designed coats and suits for Saks, Lord and Taylor, etc. I found Barbara Jean as a 12 year old in the 1940 census.

Not a very good picture but I love the neckline of Mrs. Peter Barrett's cocktail dress of silk and rayon satin by Ceil Chapman that she is wearing at the Seattle Yacht Club.

Ceil Chapman designed glamorous cocktail and party dresses in the 1940s to 1960s. She was Marilyn Monroe's favorite designer. She designed Elizabeth Taylor's trousseau in 1950 for her wedding to Conrad Hilton. 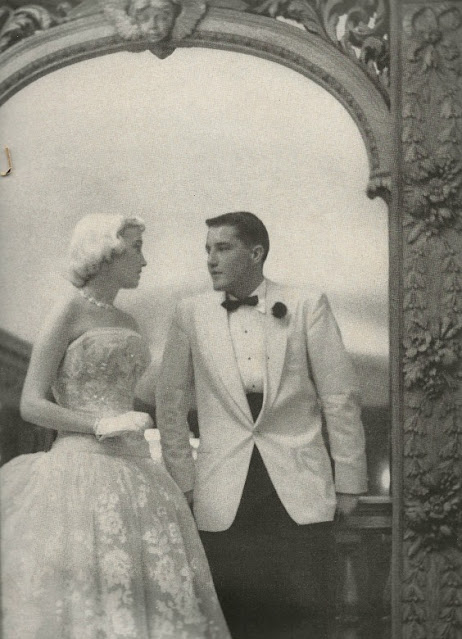 I'll end my three 1955 fashion posts from Town & Country with a dress for the young. Miss Sally Jensen and Mr. George Philip Koon are at the Olympic Hotel. Her ballgown is white lace over ombré shades of tulle by Howard Greer who designed for Katharine Hepburn. I found plenty of Koon family members in Seattle but nothing specifically for George. I did find a Sally Jensen in the 1940 census, which would have made her 18 in 1955. That sounds about right.

The magazine said this about Seattle in 1955:

It is a sleeves-up city which enjoys meeting new challenges and takes a fierce pride in solving its own problems without government assistance.

I didn't make that up, folks. I promise.